Here we are-- over three weeks after our North Pole breakfast (I can't believe it's been that long since then...it feels like yesterday!).

It's the final day of Jolly's first Christmas season in our home.

To celebrate, Jolly left us some Elf-sized donuts. Obviously he ate some of them too.... 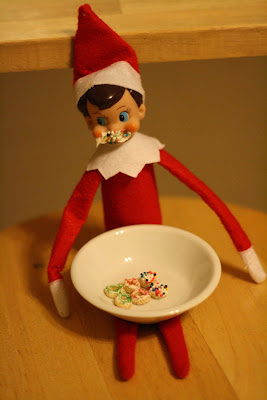 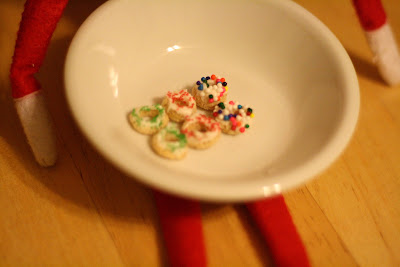 Ryan did really well with the Elf on the Shelf. Except for the one time, he never touched him. Nearly every morning, Ryan's first thought was to locate Jolly. He seemed genuinely surprised each time Jolly was in a new hiding spot. I loved seeing the sparkle of wonder in Ryan's eyes when he realized what exactly Jolly was doing (playing angry birds, enjoying a picnic, knitting an ugly sweater).

I can't say that Jolly's presence helped Ryan's behavior any, but we also didn't overly emphasize that aspect of things (per the book, the Elf is basically a scout for Santa and reports back to him every night about your child's behavior). It's not that I think that's a bad thing, but we just didn't think to use Jolly as a "you better watch out" tool. Ryan is also a very good kid, so maybe it's that we didn't *have* to use it. Maybe next year (not that I'm asking for him to misbehave!!)

I've got an Elf on the Shelf recap post planned where I'll review things I liked and things I need to improve upon for next year. Until then...
Posted by Jessica at 2:10 PM