That's the response I usually give when others ask me why I go so overboard with Elf on the Shelf.

(First of all, let's agree that the word "overboard" is subjective and left up to much interpretation.)

Here's the thing. When your fertility journey takes unexpected twists and turns and babies don't just fall out of you, I can safely say that your perspective on many things changes.

For me, one of the things I vowed to do if and when we were blessed with children, was to embrace their childhood.

"They're only young once." It's SO TRUE.

Month after month of disappointment and grief and being childless only solidified my drive to wring every little drop out of my future kids' childhood.

Now that we have a child, that desire to soak it all in hasn't waned. At all.

I have a friend who spent months and months planning her son's first birthday party. She probably spent more money on that party than I did on my wedding dress. And I remember our friends questioning why she was focused on planning every little detail of a party her son will never even remember. Some were judgmental in their questioning; others were honestly just curious since they didn't share the same desire to create such a memorable event for their child.

I'm sad to admit that at the time, I was one of the judgy moms. I couldn't believe the time and energy, let alone the money, she committed to the party.

Fast forward another year and I got it. I understood why someone would devote their entire being to planning an event, even if the child will never remember it.

It's like me and the Elf on the Shelf. This silly little Elf thing that causes moms to hurl more mean spirited comments than mentioning George W. Bush at the DNC National Convention. I'm serious!

I've seen a mom become so enraged by EOTS that she actually turned and walked away from me when someone else told her I was one of "those" moms.

The gal who stayed proceeded to berate me for showing up all of the other moms and making such a ridiculous imaginary creature seem so important.

But, I don't get upset when others refer to me as "that" mom You know, the Pinterest mom.

Because they probably haven't had the same experiences I've had.

Here's the thing: That desire that built up inside me to want to savor every little piece of Ryan's childhood is entirely responsible for Elf on the Shelf.

So when I think about how I can stir up that same belief in magic and special possibilities for Ryan, I think the EOTS fits the bill. Our Elf is special in that he only comes around once a year. His BFF is Santa. Come on, that's pretty magical, eh?

He flies to the North Pole EVERY NIGHT! He encourages good behavior while he himself is just a little mischievous. Who else can pull that off? See...magic. Pure Magic.

I have friends who won't cut their child's hair until they're at least two years old. Another friend won't use the phrase "big girl" around her daughter just yet.

Apparently, we all have our own ways of prolonging our kids' childhoods. Or at least making it distinctly childish instead of rushing them ahead into their advanced years.

So, I get it. I get that not everyone agrees with or appreciates the effort and time and money I put into EOTS.

But, as my dad says, "where you sit determines your perspective."

My perspective changed when our conception circumstances changed. And I'm eternally grateful things worked out as they did. And I'll continue to outdo myself year after year as long as Ryan believes in the magic of Santa and his Elf friend, Jolly. 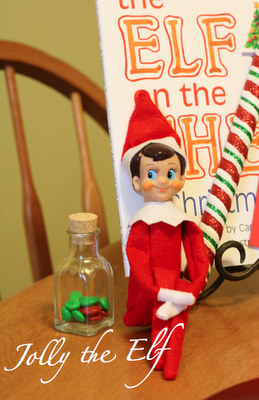 Posted by Jessica at 3:36 PM No comments: