Spent Saturday morning out geocaching with Jill & Denny. It was a beautiful day and we cached up in Edwardsville. Picked up finds #54-58. I'm thinking my updated New Years Resolution will be to find 100 :) That was my original goal, but Hubs talked me into a more "realistic" one. Looks like 100 wasn't that unrealistic after all!

I totally forgot to bring the travel bug (TB) I have (Globetrotter), but this was a nice, easy, quick cache nonetheless. 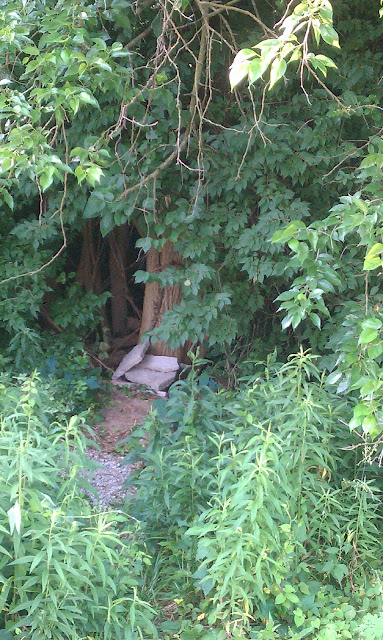 The cache was a large cooler hidden under the rock pile.

This was took us a few minutes to find, but luckily Craig came through for us (again).  It was a small bison tube tied to a screw inside of the fence rail on a bike trail overpass. 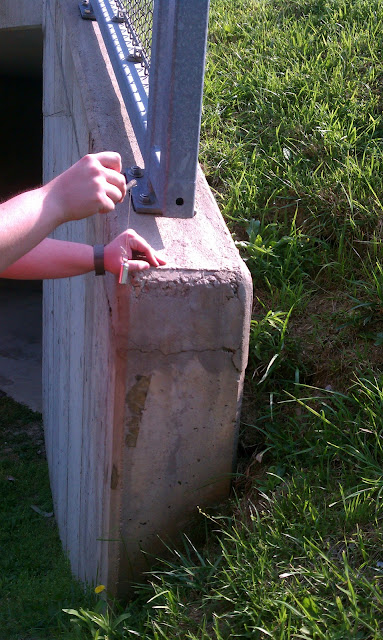 Can you see the bison tube hanging on the string?

Although this was a pretty tricky find, it was cool for two reasons: It's been hidden since 4/7/2001 (11 years ago), but it was also my first letterbox find (well, letterbox/geocache hybrid). And truth be told, I didn't find it. Neither did Jill. Craig had to get out of the car and point it out to us after we looked like very suspicious people snooping around someone's yard. It didn't help that our GPS had us off by more than 40 feet on this one. 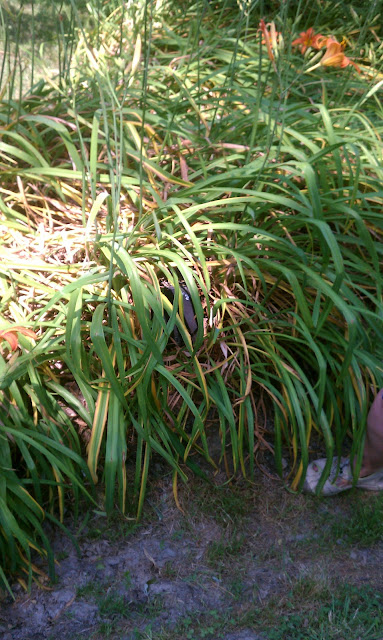 Can you see it hidden under the flowers? 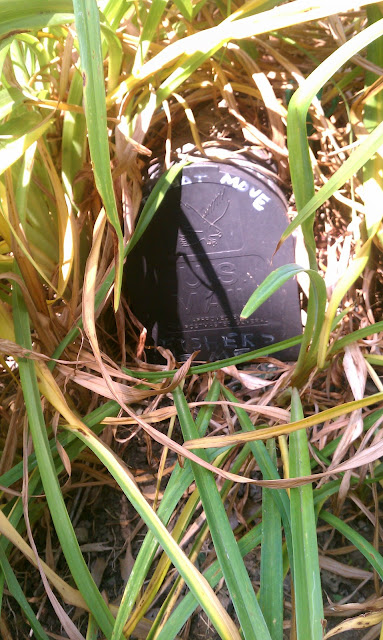 It's a hidden mailbox! 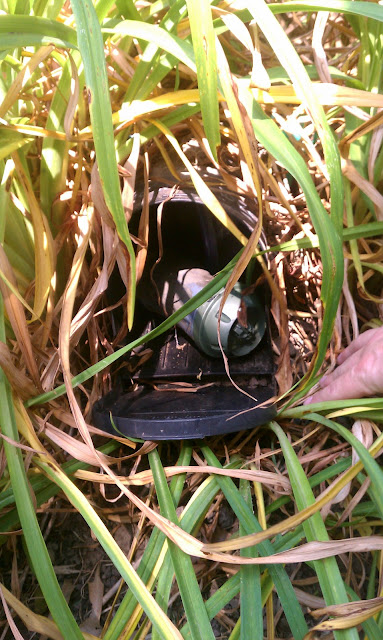 It contained both a letterbox and a geocache.

This cache was pretty lame. It was just a piece of paper inside a plastic sleeve attached to the map at the park. Dumb. But, we signed the log so we could pick up another point.

This was a really cool cache. The instructions told us to bring a gallon of water with us and to "pour fast" once we found the GPS coordinates. The cache was a metal pipe affixed to a fence. You never know if what you've found is actually the cache until you locate the log. In this case, we took a leap of faith and just started pouring the water into the pipe. Luckily within a few seconds, a clear tub floated up to the top. We grabbed the tube, signed the log, and added another smiley (find) to our list. 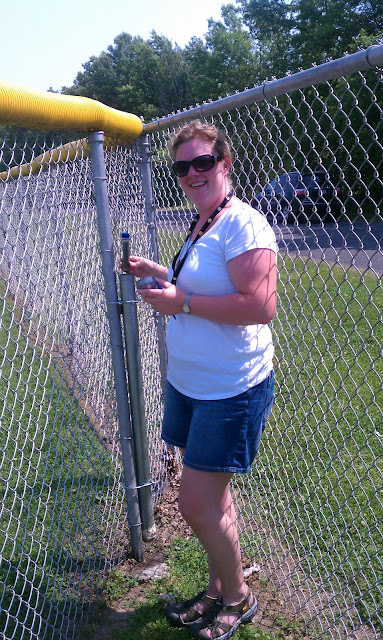 After caching for a few hours out in the heat, we were spent. We headed off to Peel (wood fired pizza-- YUMMO) and then home for the day.

All in all, it was a great day. The weather was beautiful (even though it was hot) and we had great company! We were able to find some cool caches and hike to burn off a few calories.

Email ThisBlogThis!Share to TwitterShare to FacebookShare to Pinterest
Labels: geocaching

Hopefully at the end of the summer I'll be able to say "I did it!"

I'm gunna slap the list onto a poster board so we can keep track of our summer fun. Pics to follow!
Posted by Jessica at 11:32 AM 2 comments:

Thanks to Hubs suggestion, we went geocaching outside of our hometown. As a result, we found some really great new places to hang out!

We tried finding some at the park, but there was a summer camp going on so we had to reevaluate. Luckily our little detour ended up getting us some really cool grabs.

This cache was in a very populated (high muggle) area so after two brief tries at finding it, I sent in the Hubs instead. Of course he found it immediately. Punk.  It was a magnetic box attached to a very old payphone (hence the name "Got Digits"). It was a quick, relatively easy grab. I totally forgot to snap a pic.

This cache was part of a series of caches in town. I think we found all 3 of them with "Got Bread" being the final find. We really liked this cache because it was located near a lake we didn't know existed. It's a cool place, a little off the beaten path, and we can fish there! There were several cement lions in a rock garden that RJ wasn't particularly fond of :) The cache was located under a fake rock pile. 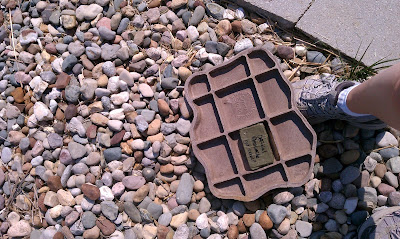 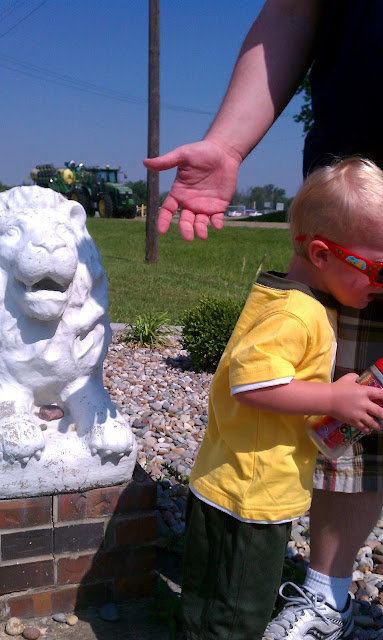 Can you see the terror in his face? He wasn't fond of the lion :) 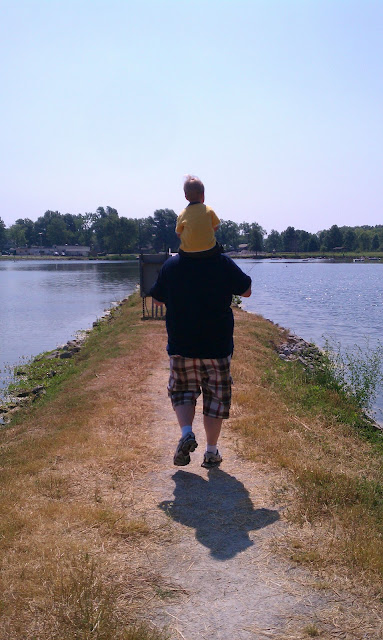 After finding the cache, we walked around the lake, which ended up being quite a hike. I'm excited to have found a good fishing hole. We'll definitely be back. 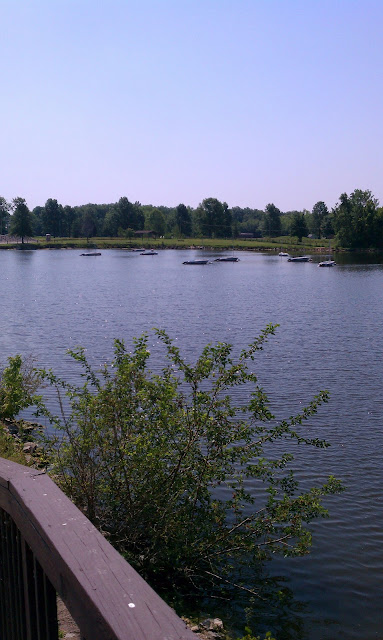 There was another cache on this bridge, but we couldn't find it and, according to the GPS, it hasn't been found since Dec 2011 (which means it probably doesn't exist anymore). It's a cool place to place a cache, though! Maybe we'll place one there someday.

And finally, our FAVORITE find of the day! This was definitely off the beaten path and it took us quite a while to figure out how to even get to the coordinates. First we started walking towards a field, but then realized there was a huge ditch we had to cross and we certainly couldn't do that with the kid in tow. Then we figured out that we had to back track and go vertical. We had to climb up a steep hillside onto an old platform that used to be an active railroad track. We hiked down the trail and finally found a clearing in the trees. 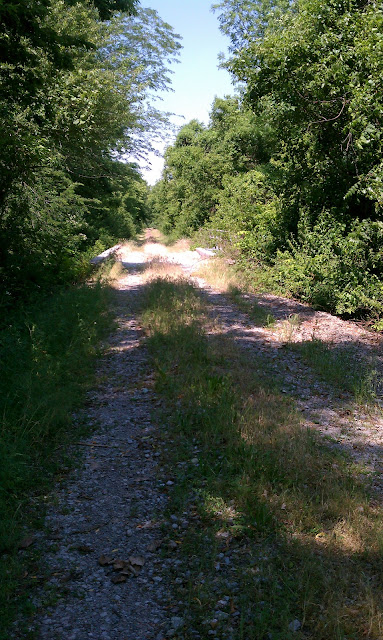 After about 25 minutes of hiking and backtracking, we Craig finally found it. 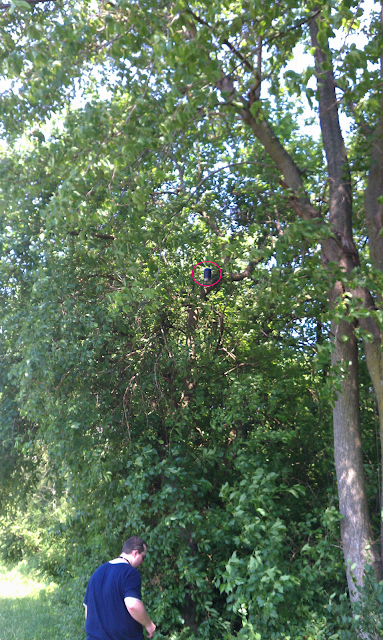 Can you find it? I circled it in the pic above...

It had a pulley system which we used to lower it so we could sign the log. This was definitely our favorite cache of the day, therefore earning the much coveted Favorite Award on the geocaching website. 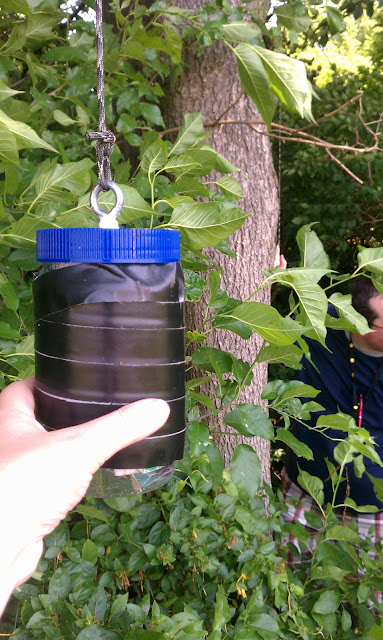 RJ did awesome throughout the morning. It was HOT and we got quite the workout, but he handled it like a champ. Just as he always does :) 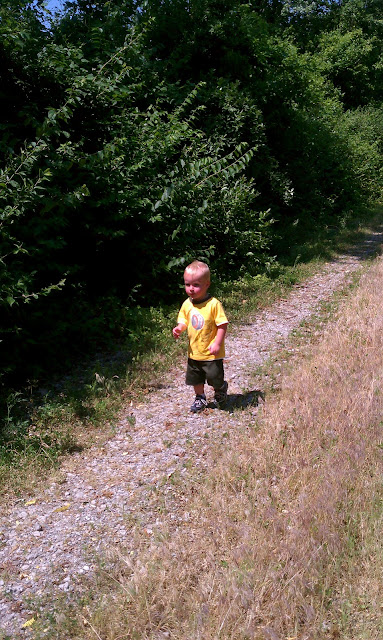 RJ is the main reason we started geocaching in the first place. We wanted something to do outside with him once he was old enough. Now we have this fun and physical activity and it definitely gets us outside experiencing all that Mother Nature has to offer.

My New Year's Resolution for 2012 was to reach 50 geocaches found. Well today, we did it!

It is absolutely beautiful outside today and hubby asked if I wanted to go geocaching. Of course I do :) We loaded up on caches and for the first time, we exclusively geocached outside of our hometown (in a town about 10 miles away).

While I forgot to snap a pic of the actual cache, I did get a few of us near the statue for which the cache was named: 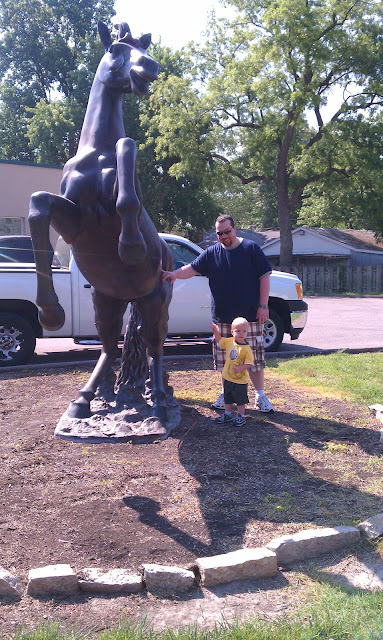 We picked up several more caches today, including one that earned a much coveted "Favorite" award!
Posted by Jessica at 11:17 AM No comments: