Each year the local Chamber hosts a very nice holiday party and collects canned goods for the food pantry. The party was last night and this morning, we had the pleasure of going to the food pantry to deliver the truck full of goods. Ryan also brought the cans that Jolly left him yesterday morning.

We also got a tour and learned about all of the amazing things the food pantry does for our community. 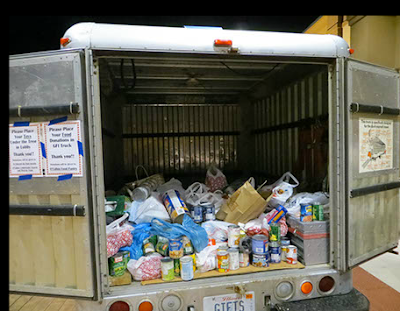 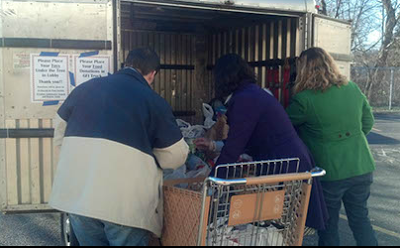 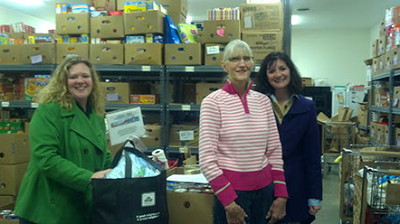 I loved hearing about all of the different groups who support the organization. For example, the girl scouts are too young to actually work at the pantry, so instead, they put together "birthday bags" which each contain a boxed cake, frosting and a small gift.

A group of older women collect diapers to donate. They even made a sign that reads "no more wet butts!" hahahaaa!

Wal-Mart recently started donating slightly damaged goods, such as laundry detergent bottles that leaked during transport or shampoo bottles that are missing a cap. Items they previously had thrown away now get fixed up and put into the food boxes. They also were going to throw away all of the leftover Halloween costumes, but the food pantry intervened and offered to take the costumes.  They then partnered with the local fire house who agreed to take the costumes and make sure that kids in need receive them next year.

While I was there, an elderly lady walked in. Patty, the volunteer working with me, went to introduce me to the gal. I turned to shake her hand and I said, "Myrna??" She was totally surprised that I knew her name. Well, it turns out that Myrna and I worked together back in the mid 1990s when we both volunteered at the base hospital through the Red Cross (I was in high school at the time). I can't say with certainty that she remembered me (she's in her 90's now), but she and I shared stories about our time out at the base. She said times have changed and she moved on to find other ways to volunteer, which is what brought her to the food pantry.

She is such a character! And this morning was no different. In her English accent, she recounted meeting a man with a polish last name (her late husband was Polish), and asking where in Poland he was from. In a thick Texas accent, he indicated he'd never left the US :) Hahaha! She is just as feisty and I remembered her to be.

Email ThisBlogThis!Share to TwitterShare to FacebookShare to Pinterest
Labels: life