Houston, we had a problem.

During Jolly's joy ride with Santa, Ryan just couldn't help himself and he touched the Elf!

If you know the story of Elf on the Shelf, then you know that touching Jolly is a no-no. If he's touched, he could lose his magic and no longer be able to fly to the North Pole to report to Santa.

The cool part was the Ryan admitted that he had touched Jolly (I didn't see it). He came into the kitchen while I was making lunch and said "Mommy! I touched Jolly and he didn't lose his magic!"

I explained that he *DID* lose his magic and that we'd have to wait and see what happened. 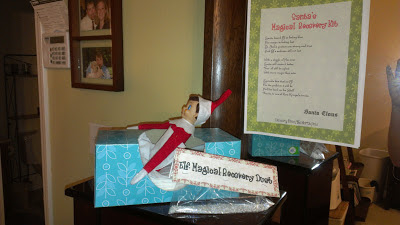 Jolly was found resting in a Kleenex box. Fortunately, Santa sent an Elf Recovery kit (thanks to Over the Big Moon). A few times during the day, Ryan sprinkled magic Elf dust on Jolly in hopes that his magic would return. The kit also came with a cute poem and an Elf Certificate of Health. I'm just thankful I didn't have to make this stuff myself!

Ryan seemed remorseful about having touched Jolly and went the rest of the month without even going near him :)
Posted by Jessica at 12:54 PM