Elf on the Shelf Day 2

Silly Jolly-- he's taking a marshmallow bath in the sink!

Ryan thought this was hilarious. 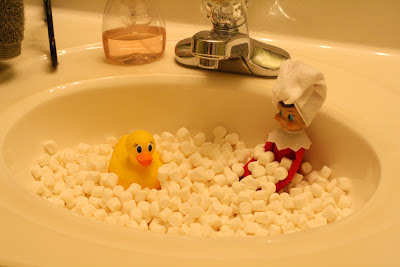 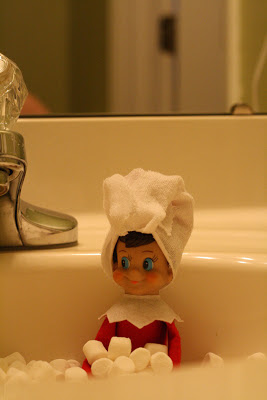 The kid also has no problem eating dirty bath water :)

What I love is that even at 2.5 years old, Ryan gets this. Standing outside his door this morning, I heard him say "Santa said open the door!" We went into his bedroom and the first words out of Ryan's mouth were "Jolly's gone! He flew to the North Pole with Santa and didn't come back!"

He was thrilled when we explained that he probably *did* fly back, but he's just hiding somewhere else in the house.

We walked downstairs to the main floor bathroom where the door was open (the door is NEVER open b/c Ryan's OCD-ish tendencies makes sure it's always closed) so he knew exactly where to look. He cracked up laughing when he saw Jolly in the sink.
Posted by Jessica at 4:59 AM